Are you tired of the rising gas prices? Are you looking for fun and affordable activities to do with your family without having to go far from home?Well, you’re in luck! Universal CityWalk’s Summer Block Party is your one-stop shop for fun and entertaining events right in your own neighborhood.

professional dance instructor Marco Antonio with a live Salsa band to capture the suave moves of the popular Latin dance.

WHAT: In this first-ever U.S. competitive performance series, “Wannabe Wicked” challenges aspiring performers to sing ‘til they’re green in the face to win a walk-on appearance in the Los Angeles blockbuster production of “Wicked.”

WHAT: The CityWalk stage is set for young talent as Hollywood Launch Teen Talent Search returns, kicking off with an open audition on Saturday, June 28 from 1-3 p.m. One lucky winner will enjoy a scholarship to Hollywood Launch’s elite performance training program and a recording contract.

WHAT: Guests may need to do a double take on “Flashback Friday’s” as popular ‘70s, ‘80s and ‘90s tribute and cover bands turn heads and beg the question: are they or are they not?

June 27 – “Face to Face,” a Tribute to Billy Joel and
Elton John

July 4 – “Surfin Safari,” the Ultimate Tribute to the Music of the Beach Boys

WHAT: The stars shine bright on CityWalk as Saturday nights rock to the rhythmic sounds of popular Celebrity Bands who act or dance by day and sing by night. 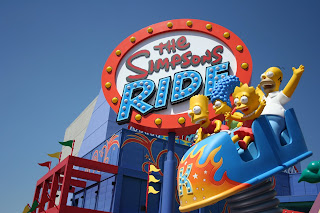 Universal Studios Hollywood invited us out to experience their newest attraction, The Simpsons Ride. The ride is housed in the former location of the Back to the Future ride. The rides are similar in that they both use an Imax screen and simulator ride vehicles. A big difference was that while BTTF always gave me a headache, the new Simpsons ride was actually comfortable.

The ride features the Simpsons animated in 3 dimensions, al’a Shrek or Toy Story. The action is fast and funny. The movie is hilarious and one that would require multiple rides to catch all the jokes, both audio and visual. You have to wonder why it took this long to get a ride featuring the Simpsons created. It features all the original voices from the television show – including Kelsey Grammer as Side Show Bob!

This ride is definitely not for those who suffer from motion sickness. Children must be 40″ tall to ride. However, there is a well planned and organized child trade-off area for parents with small children. Just ask a ride host where to go and they’ll gladly point you in the right direction. Check out the fun website at simpsonsride.com.

I’ve decided to compile a list of Free Admission Days to local popular museums- With summer upon us and kids out of school it’s the perfect time to visit one of our local museums and what better way than on a free day!!