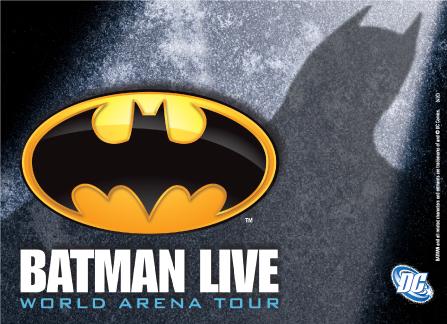 Update: The giveaway is now closed. The winner of the giveaway is Megan. Thank you again for entering and stay tuned because I have other great goodies to giveaway soon!

Earlier in the month, I posted about Batman Live coming to the Staples Center from September 27th to the 30th. . The Staples Center will host 7 shows.  The  live-action arena spectacular  BATMAN LIVE is a 15 million dollar stage production with an original story featuring a 43 strong cast of actors and circus trained acrobats, a 3D Gotham City landscape, a bespoke symphonic score, custom-built state-of-the-art stage, a 100 foot bat-shaped LED video wall, pyrotechnics and the impressive Batmobile, designed especially for the show by legendary racing car designer Professor Gordon Murray.

Faithfully adapted from the DC Comics characters and stories, BATMAN LIVE focuses on Robins quest for justice, which leads him to follow in the footsteps of his hero the mysterious vigilante known as Batman, much to the dismay of his protective guardian, billionaire Bruce Wayne, whom the audience knows is secretly Batman. This dynamic triangle resolves itself in a non-stop thrill-ride across Gotham City that transforms Bruce Wayne and Dick Grayson into the legendary crime-fighters, Batman and Robin. The adventure transports the audience from the Big Top of Haly’s Circus to the depths of Arkham Asylum, and from the glittering peaks of the Penguins Iceberg Lounge to the subterranean wonders that await inside the Batcave.

I have a four pack of family tickets to giveaway to the Thursday night show. This giveeaway is open to local residents only and will close on Wednesday, Sept 26th at noon. All you have to do is let me know why you would like to go and you will be entered. Good luck and don’t forget that you can learn more about the show by checking out Batman Live onFacebook or you can purchase tickets here. You can purchase a family four pack of tickets for $80. . The Staples Center will host 7 shows from September 27th to the 30th. You don’t want to miss it!

Disclosure: Batman Live is a sponsor of Daytrippingmom.