It is important for our kids to know about science and world around them. Imagination is needed but so is reason and reality. Bill Nye – the Emmy-nominated host, educator, engineer, and curator of curiosity – returns with a new show that tackles topics from a scientific point of view, dispelling myths, and refuting anti-scientific claims. But the revelations are real, Bill reminds us, as he neutralizes falsehoods and boosts the truth: “It’s not magic– it’s science!” Each episode of Bill Nye Saves the World, which begins April 21st on Netflix, entertainingly and enthusiastically dives into a specific topic or concept through lively panel discussions, wide-ranging special correspondent reports and Bill’s very special blend of lab procedure and genuine persona. Equipped with inquisitiveness, chemical-resistant gloves, and his beloved bow ties, Bill’s a magnetic force that’s hard to resist. 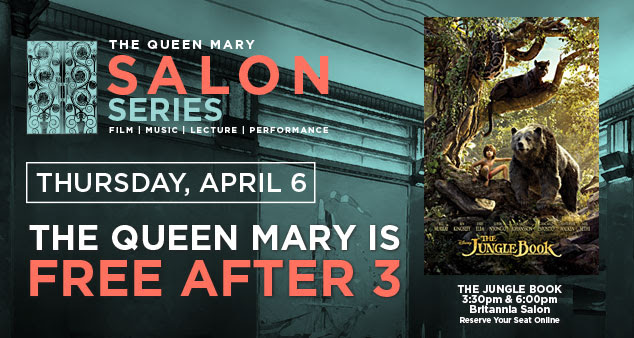 2017 marks the 50th Anniversary of the Queen Mary’s arrival in Long Beach and to kick off the celebration, they are offering FREE entry to the ship on April 6th after 3PM. On this day, they will offer enriching historical tours and 4D Theater experiences for just $5 and will welcome back The Salon Series, a monthly evening of entertaining public programming for guests of all ages.

This week Salon Series Presents – The Jungle Book
Location – Britannia Salon aboard the Queen Mary
Time – 3:30PM & 6PM
Cost – Free with RSVP
RSVP required for entry but does not guarantee a seat at the event. Seats will be released on a first come first serve basis. Standby line will be available onsite.
Parking – Discounted Parking – $10 flat rate parking after 3PM