If nothing else, you have surely seen the hilarious scene featuring Flash, the DMV-employed sloth. Zootopia is some of the best work from Walt Disney Animation Studios (WDAS). It should be noted that while Pixar is also Disney, they are completely separate animation studio with a different flavor and philosophy behind their pictures. WDAS carries on the legacy dating back to Snow White and the Seven Dwarves.

Directed by Byron Howard (“Tangled,” “Bolt”) and Rich Moore (“Wreck-It Ralph,” “The Simpsons”) and produced by Clark Spencer (“Wreck-It-Ralph,” “Lilo & Stitch”), the progressive mammal metropolis of Zootopia is a melting pot where animals from every habitat live side by side and “anyone can be anything.” But when new rabbit police officer Judy Hopps (voice of Ginnifer Goodwin) arrives in town she discovers that being the first bunny on a police force of tough, hulking animals isn’t so easy. Determined to prove herself, she jumps at the opportunity to crack an unsolved, challenging case even if it means working with a fast-talking, scam-artist fox, Nick Wilde (voice of Jason Bateman), to solve the mystery. But the case leads these two unlikely partners to an uneasy conclusion that Zootopia’s “evolved” society is being pulled apart by unseen forces determined to use fear to take control of the city by turning predators and prey against each other.

The Blu-ray is filled with more extras than you can shake a stick at! It’s truly one of our new favorites. You can order your copy today from fine retailers, including Amazon. It is also available On-Demand. 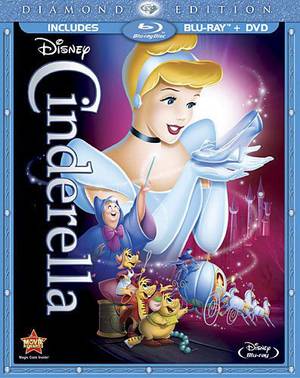 She has her own castle in Florida (and Tokyo!) and is perhaps the most beloved Disney princesses.  Her favorite tune is “A Dream is a Wish Your Heart Makes.” Who can it be other than the incomparable Cinderella! She’s back and has never looked better. Released today is the all new Cinderella: Diamond Edition.  It is now available on Blu-ray and chalk full of terrific extras.

As with all of the restored films released on Blu-ray, Cinderella looks brighter than ever and sounds amazing.  It joins Snow White, Bambi, Lady and the Tramp, Beauty and the Beast and The Lion King with this Diamond Edition. The color is dazzling and the film has never looked more beautiful.

This is one of the few films my daughter would not stop watching when we first got the original DVD.  Now we have revisited it on with the Blu-ray disc and it feels brand new all over again.  The film is 62 years old, but like all of the Disney classics it is truly timeless.

I love the current trend of many films being released on Blu-ray but also containing a regular DVD of the film as well.  It helps if you have a DVD player in the car and a Blu-ray player in the house. It’s also great if you haven’t made the leap to Blu-ray yet but intend to in the future.  The Blu-ray contains many extras that have never been release before this.  One of the elements is called the “Second Screen” which provides you interactive, behind the scenes experiences with the animation art.

There are several versions available: the combo pack with the Blu-ray, DVD and a digital download copy is the best value.  The digital copy allows you to have a copy for your smart phone or iPad!  There is also a 6-disc jewelry box set that contains Cinderella and the two sequels with two discs each, one Blu-ray and one regular DVD. It would make a great Christmas gift, but hurry, because like all Disney releases, these will eventually go back in the vault and won’t be available for many years.

Disclosure: I was provided a preview copy of the film for this review. 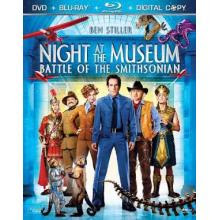 Last week, I had the opportunity to take my hubby and daughter to the Fox Studios in LA for a preview of the Night of the Museum, Battle of the Smithsonian DVD. It was fun to hear the director, Shawn Levy, talk about the fun extras (including a fun Jonas Brothers cherub boot camp extra- so funny!) included in the Night of the Museum DVD which will be in stores December 1st. We also were able to take pictures with the monkey from the movie. It was hilarious! I wish I could post the pictures but my scanner isn’t working. We had an unbelievable time.

I think if you’ve read my blog for some time now, know that I love a day at the museum. I loved the first movie and I actually think that the Battle of the Smithsonian is even better! It’s cute, funny and my daughter and I laughed throughout the entire movie. It’s a fun family movie that your entire family will enjoy.

There is an amazing deal going on at Walmart.com. . Basically, if you pre-order the DVD on walmart .com it’s only $9.98 AND there is FREE shipping. Since the retail value is $29.98 – it’s 20 bucks off and you don’t even have to step into a store. It would be a great Christmas present!

I also have 5 copies to giveaway! All you have to do is leave a comment letting me know your favorite museum and you are entered to win. You have until next Friday 11/27 to enter.