With the writers strike now over and many shows going back into production that means prime time on the studio tours to catch stars in action. Unlike Universal, who see millions of tourists each year, only about 120 people a day discover the Warner Bros tour. It’s surprising more people aren’t aware of it. But don’t come looking for an amusement park attached, this is strictly a studio tour. This really is a VIP tour. You are taken in a group of 10 and driven around in a golf cart. This tour originally began as a way to show some Very Important People around the studio back lot. Eventually, Warner’s decided to expand the VIP tour to include members of the public as well.

The tour begins at a small visitors center where you check in and get your tickets.

Before the tour, guests are shown a 15-minute film chronicling the history of Warner Bros Studios.
Then it’s out to the carts again, to settle back for the tour. The trams seat only two across, so everyone has a good view as you roll through the vast 110 acre lot.

Part of Midwest Street is a residential avenue of period Victorian houses, used most recently in GIlmore Girls. The Seavers house from growing pains is also found here but it has been modified quite a bit since the show used the house. This is also the street from Gremlins.

The oldest section of the back lot at Warner Bros is New York Street, a mock city block, built in 1930 for the gangster movies that made Warner’s famous – starring the likes of James Cagney and E.G. Robinson.

Visitors don’t spend all of their time on the tram, either. The trams stops and they let you get off to explore at various points along the way. That used to include a stop at a Western town set (called Laramie Street), where you could snoop inside the old saloon and other mock buildings, walking the same dusty streets trod by stars such as John Wayne and Gary Cooper

In 2004, Warner Bros tore down the Laramie Street set. It has been replaced with a new set called “Warner Village”, which consists of exterior facades for 11 two-story capecod style homes, forming a faux, upscale residential neighborhood they can use in future films. Hidden behind the home exteriors, though, is studio office space. The upstairs offices have rear entrances and aren’t visible from the front of the houses, so producers can film on one side and writers can do their business on the other. Universal Studios is the only remaining studio with a Western backlot.

We visited both the costume warehouse and peaked into the prop warehouse which is full of stuff. Inside this area is part of the coffee house set from Friends. You are allowed to sit on a couch on the set and take pictures.

You’ll be allowed to go inside one of the giant sound stages, and see the set from a TV show. We were able to visit the set to the George Lopez Show when we were there (before it was cancelled.)

Since the tour is with a small group and with the amount of walking around, the chances of seeing someone famous here are much greater than Universal Studios where the trams are typically diverted from production. We saw Garrett Morris on the day we were.

The tour tries to include some filming whenever possible. Exactly how much action you encounter, however, is more or less the luck of the draw, and depends upon when you happen to arrive. Mid-April, for instance, is one of the worst times of the year to see shooting at the studio – almost all of the shows are “in hiatus” and action at the studio is minimal.

The tour lasts just over two hours. You can spends some extra time at the end while inside the Warner Bros Museum.

You can bring a still camera, but you can only use it on the back lot – not during the other half of the tour. They lock up your cameras for other parts of the tour. Video cameras are not permitted.

Tour of studio costs $45 per person, regardless of age (minimum age is 8). All adults must present current government issued photo identification upon registration and persons under 18 years of age must be accompanied by an adult.

The guided tours are given on weekdays only, every half hour, Monday through Friday from 9 AM to 3 PM (in the summer the last tour leaves at 4 PM). No tours on the weekend.

A deluxe tour is also available for $150 that lasts for 5 hours and includes lunch at the studio commissary. It requires advance reservations. Once we give it a try we will let you know. 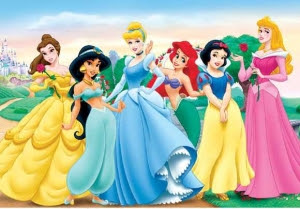 If you have a daughter, no doubt she is enchanted with the Disney Princesses. My soon-to-be three year old loves them, especially Cinderella. We have had our annual passes to Disneyland for years, but it was not until this weekend that we experienced, a relatively new attraction at Disneyland, the Princess Fantasy Faire. It’s held at the Fantasyland Theater, where the Snow White musical was held a few years ago. This has been a huge hit with visitors since it opened in October last year and it was easy to see why.

First of all, The Princess Fantasy Faire is layed out into several sections. There is a Meet and Greet section, a Craft section, a Dress-up and Makeup section, Storytelling, and the Coronation. I will now tell you about each area.

The Royal Coronation runs several times a day. The times are listed on the daily entertainment guide as well as at the entrance to the fair. This portion takes place on the stage and the floor below. The first part of the ceremony teaches young Princesses and Princes important royal things like how to bow and curtsy. Next, three Princesses will descend the red-carpeted staircase and be introduced to the crowd below. We saw Sleeping Beauty, Snow White and Cinderella. I’ve heard Belle is sometimes in the mix too. Dance poles are brought in and each child is instructed to grab onto ribbon, like a May Day pole. Each Princess will go to a different pole and then the dance begins. As the Princesses leave confetti and streamers are shot out into the arena for the grand finale.

The craft area is set up with tables and seats and has crowns to color and decorate. These tables are set up in full view of the stage so even if a child is working on a craft, he or she can see the Royal Coronation. This is found house-left.

This area is to the right of the arena. Here you can purchases dresses, tiaras, shoes and more for your little Princess. There are also makeup mirrors your Princess can be completely made up before going to meet the Princesses.

The Meet and Greet is set up so that you have one line to see three Princesses or Princes. There is a person at each station to take pictures and give you a Photo Pass card. The line forms behind the stations so while in line you will not see which characters are waiting to meet you. This area is usually held on the theater floor in-between coronations and storytelling.

The storytelling takes place on the floor of the area. Times are listed on your daily entertainment guide. Each day they have each Princess tell her story twice. Carpet circles are laid out for children and parents to sit for the story. On our day, we heard a story told by Snow White. She also has a prince-type character assist her as narrator. This is the same experience that used to held in the Tinkerbell Toy Shoppe just before the Princesses exploded in popularity.

Our daughter loves to dance and thoroughly enjoyed the coronation. If you have younger children, they might be overwhellmed, but all will enjoy the storytelling.

Sure there are lots of books to check out and read with your kids, but the library has many more things to do other than reading books. Our library here in Yorba Linda has all sorts of free events for young children. One of activites is called “Laptime.” Children ages 0 to 2 and an adult can share stories, rhymes, puppets, fingerplays and music activities. Best of all, this is free. The library requires that you sign up and gives Yorba Linda residents first priority. For children 3 to 5, the library has a similar activity. These last for 30 minutes and are held once a week. Our library even has a family time where the whole family is invited for a 45 minute activity on Saturdays. Check with your library to see what fun they have waiting for you.