Summer is upon us! My kids have two more weeks left but many schools are out this week. What to do for fun is always the question? And what to do that is affordable?? Beginning tomorrow at a Regal theater near you is their Summer Movie Express, featuring fun family films for a fabulous price.  Admission to the movie is only $1 and a portion of that goes to the Will Rogers Institute.  If you don’t know, the Will Rogers Institute raises money for research on cardio-pulmonary diseases.  They have teamed up with movie theaters for years to raise money for this great cause.

The program will run for 9 weeks and begins on different Tuesdays throughout this month, so check here for the schedule at the Regal theater closest to you.  Some of the films include The Lego Movie, Peabody and Sherman, and The Croods.  All films begin at 10 AM and are rated PG.

It’s a movie you’ve probably seen dozens of times, but you have never seen it like this! September 20th, for one week only, The Wizard of Oz is coming to IMAX screens in 3D.  We got a chance to experience this unbelievable movie experience earlier this week at the newly remodeled TCL Chinese Theater. It is now the largest IMAX theater anywhere and this is the perfect film to exhibit for the theater’s renovated debut.  Did you know that the original film premiered at this same theater in 1939? 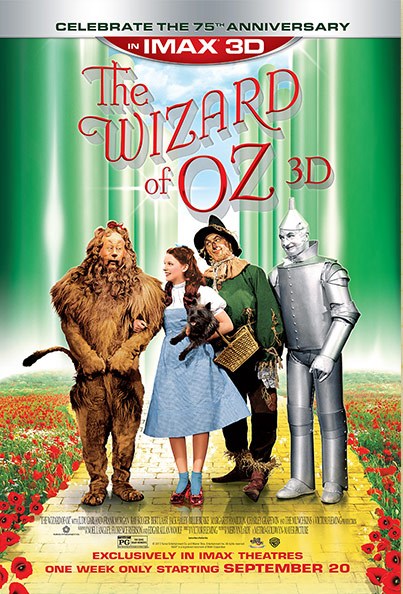 The movie has never looked better. This is not just a 3D conversion, but a full restoration of the movie. Any fears of seeing a grainy blown up film should be put aside because the movie looks sharp. The 3D conversion process took over 16 months to complete and had over 1000 people that worked on it.  Below is a short film on the process used to get the film ready for the 3D IMAX treatment.

Here’s another fact you might not know: A double was used for Judy Garland in three scenes. Her name is Bobbie Koshay. In the first, at the opening of the movie, Bobbie balances on a fence and then falls into the pig pen. In the second, Bobbie is seen from the back, opening the door to Munchkin Land before Dorothy emerges in Technicolor. And it’s Bobbie again, from the back, when the flying monkey’s pick her up from the haunted forest.

This is a unique event you do not want to miss.  Bring the kids, bring the grandparents, bring your neighbor! Visit the IMAX website to find a theater near you.

It looks like it will rain this weekend and I don’t know about you but if it is cold and  I have bored kids I want to do something that is simple, fun and well cheap. The movies are usually a good idea but tickets  can add up quickly. A night at the movies has become painfully expensive. With prices hovering over $10 a person, it can really put a dent in your pocketbook. Thankfully we have several dollar/bargain theaters in the Southern California area. There are local dollar theaters in the Inland Empire, LA , Orange and Ventura Counties. I searched and searched and couldn’t find anything for the San Diego area. If you know of one in the area , please email me so I can add it to the list.

We love visiting bargain theaters because they’re inexpensive and if the kids became bored and we need to leave, we are only out a couple of bucks. Family films are particularly popular at these type of theaters, so it’s usually easy to find something for everyone. We’ve had a great experience and I’m sure your family will too!!